Instance 1:  Three skis all waxed with Rex Blue with the temperature in the 20 Deg F range.  Many prior tests showed the skis should have very similar friction levels (coefficient of friction difference of 0.001 or less).  In this instance one of the skis was consistently 0.0025 slower.  Repeated hot scraping and relaxing with Rex Blue did not change the outcome.

Then the skis was cleaned with a chemical wax remover.  A large amount of dirt of observed when the wax remover was wiped from the ski surface with a paper towel.  It took 5 applications before little dirt was observed after wiping (see photo sequence below showing the dirt removed in each of the 5 applications of wax remover).  Three applications of Rex Blue wax was applied, scraped and brushed.  When tested again against our other skis they returned to having nearly identical coefficient of friction levels.   All testing was done under similar snow conditions and temperatures.

1. Hot waxing and scraping did not clean the ski base.

2. Five applications of a chemical wax remover were needed to return the ski to it's typical gliding

Instance 2:  During the course of a durability experiment our control ski started gliding unexpectedly slow.  Soot was observed on our test track due to wood burning fireplaces in the neighborhood.   The control ski was only run down the test track, it was never used for trail skiing.   So if it accumulated dirt, it did so very quickly with little accumulated gliding distance.

The ski base was treated with two applications of a chemical base cleaner and rewaxed three times.  A dramatic reduction of ~0.003 in the coefficient friction was measured after cleaning. (0.003 is a rather big number).  All testing was done under similar snow conditions and temperatures.

TAKE AWAYS:
1. Dirt can accumulate very quickly and does not take a large amount of gliding over snow.
2. A chemical base cleaner was effective at improving the gliding properties of the ski. 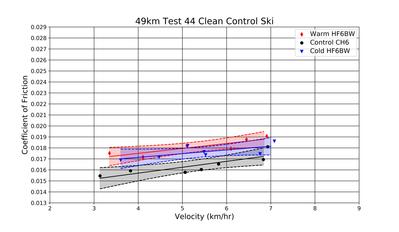 Ski Test Guys #1 recommendation for faster skis: Clean your skis with a chemical base cleaner!

Friction test results before and after cleaning

Wiping rag after one application of base cleaner on each ski 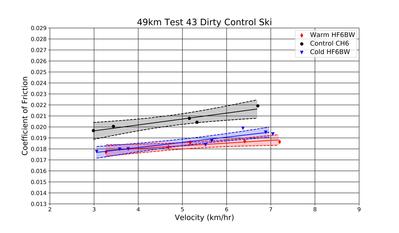 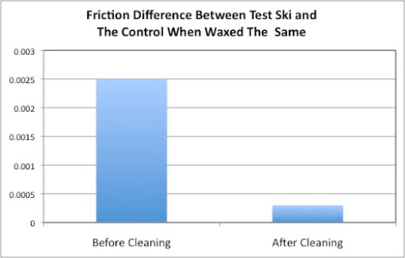 Dirt accumulation on the ski running surface can have a very large impact the coefficient of friction.  We have encountered this several times during our testing.  We have skis that we have tested many times and know they have very similar performance when waxed the same.  The data shown below documents two instances in which the behavior of one of the skis was suspiciously slow.  We cleaned the ski with a wax remover in one instances and a chemical base cleaner in the second.  Both times we saw a dramatic improvement in the gliding performance of the ski after cleaning.  We have found hot waxing and scrapping to be ineffective at removing dirt. 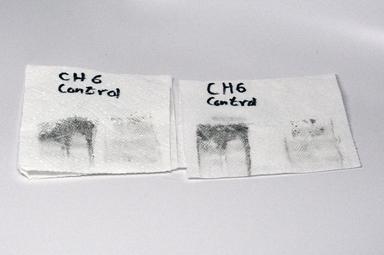 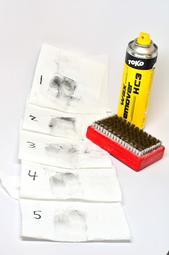