We measure the decay in the velocity of the test sled with a series of eight proximity sensors on the test track spaced 30 cm apart.

The sensors emit an infrared red beam of light that is reflected off a series of four targets on the bottom of the test sled and picked up by a detector on the sensor.

The data is collected by a laptop computer and gives us 32 data points of sled position vs time for each run down the test track.  From this we can calculate the rate at which the sled is slowing down.  And from that, the coefficient of friction.

A few notes on ski and test track preparation:

The skis are hot waxed, scraped and brushed per the recommend methods.  Three cycles of waxing/scraping/brushing are done anytime a different type of wax is applied to the test skis.

The test track is defined by 3/4" x 3/4" aluminum channels placed on a frozen lake surface to establish a flat plane.  Snow is packed between the channels and leveled with a grooming tool.  The snow is allowed to set up for at least several hours prior to testing.  The snow is removed and replaced with different snow on a regular basis.

Prior to testing, the sled is run down the test track multiple times before gathering test data to further pack the snow and create a more uniform testing surface.

​For more detailed information, see our technical paper in Journal of Sports Engineering 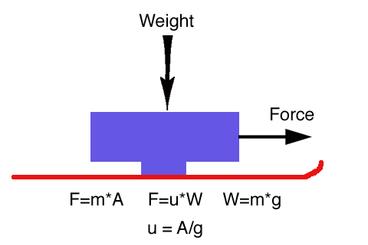 The coefficient of friction data is confounded with the aerodynamic drag of the test sled.  To factor out the drag and to get better quality data overall we run the test sled down the test track multiple times at different velocities.  We fit a linear regression through the data points and determine the friction of the skis being tested at a common velocity of 5 km/hr.

A result from a typical test session is shown to the left.  Note that the friction vs velocity data for the various skis being tested is generally linear and the lines are parallel to each other so the relative difference found at 5 km/hr applies to a much wider range of velocities than just at 5 km/hr.  But by comparing all the skis/waxes at 5 km/hr we can eliminate the confounding effects of air drag.  Other researchers (https://link.springer.com/article/10.1007/s11249-016-0719-2) have also shown that the coefficient of friction is linear with velocity so the comparison at 5km/hr is valid across a wider range.

By using an exercise physiology power model we can estimate what effect a small change in the coefficient of friction will have on ski race times. 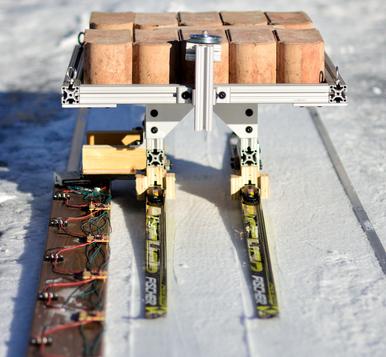 ​Starting in 2018 we are also measuring the water contact angle of ski waxes.  Fluorinated waxes are claimed to make skis faster by making them more water repellent.  Water contact angle is a common way of measuring water repellency and cleanliness of a surface.  Examples of a ski base with a plain paraffin wax vs a 100% fluoro liquid top coat are shown below.   There is not doubt that fluorinated waxes have a higher water contact angle.  But does that correlate to lower friction?   The full set of this data will be available later in 2019. 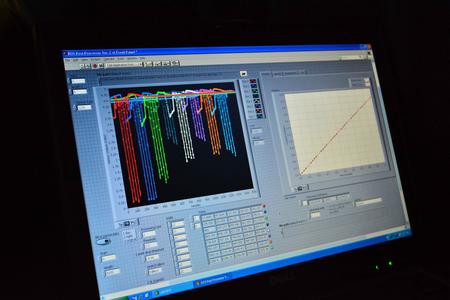 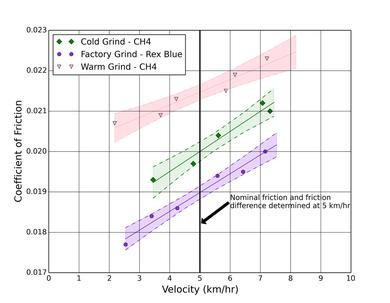 Measuring the Coefficient of Friction of a Ski on Snow

​​​​The physical parameter that describes the gliding property of a ski is the coefficient of friction.  It is often abbreviated as COF and represented with the symbol u.

We determine the coefficient of friction by measuring the decay in the velocity of a test sled (Deceleration: symbol A) as it moves along a very flat test track.

By balancing the friction and inertial forces on the sled and rearranging a few terms the Coefficient of Friction can be expressed as the deceleration of the test sled divided by the force of gravity (u = A / g). 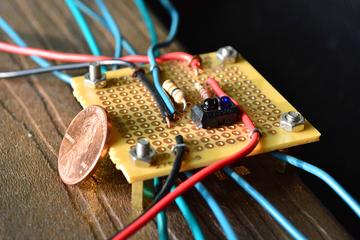