The difference in gliding difference between the two friction levels is shown below in terms of "lengths of a ski" and starting velocity.  The ski length here is assumed to be 185 cm.  This simulation was done for fast, typical and slow snow friction.  30 km/hr is not a high speed for a downhill, it's still a pretty modest hill.

​The traditional way to test ski wax performance is with a glide-out test.  The effect of a small change in ski friction on your gliding distance can be estimated using some basic physics.  This analysis assumes a skier is moving across level ground with some starting velocity (from going down a hill for example).  The physics model includes aerodynamic drag and ski friction.  In this model the frontal area of the skier is set to 0.5 m^2 and the coefficient of drag is 0.55.  The coefficient of friction was set to either 0.020 or 0.021, which is typical for moderate temperatures.  As described above, a 0.001 change in friction will change a typical Birkie race time by about 1.5 minutes or the time in a 5km race by about 9 seconds.

The chart below shows the distance covered in a gliding test vs time until the velocity reaches zero.  Starting velocities between 10 and 30 km/hr were simulated.

The test method and results presented here have been structured to provide useful, practical information that will enable skiers to make informed decisions regarding the degree of improvement they can expect from the many commercially available products on the marketplace. Following the methods of Moxnes, et.al., simulated race times were calculated using the course profile of the 2016 American Birkebeiner ski race, pictured above. 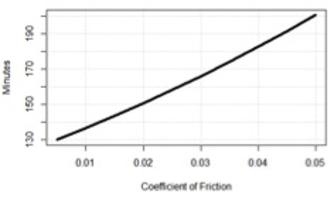 Due to using the wrong wax.  Note: at 15F all waxes are very similar.  This shows the effect of a 5 Deg F shift from that point.

Another way to put an increase in friction into other terms more easily understood by skiers is to equate the work of overcoming friction with the work associated with climbing a hill.  If you skis have a coefficient of friction 0.001 higher than they could have been that requires you to work harder by the same amount as gaining an addition 1 meter of elevation for every kilometer of skiing.  For a Birkie, that works out to climbing an additional 160 ft tall hill that your competitors do not need to climb.

Additional work required due to a change in ski friction

Default values for skier locomotive power and skier mass were 200 Watts and 73 kg. The product of drag coefficient and area was set to 0.55 below a velocity of 10 meters/s, and 0.35 at higher velocities, to represent a tucked position. Similarly, the locomotive power was attenuated at higher velocities. Time to complete the approximately 51 kilometer course is plotted above for friction coefficient values from 0.005 to 0.05.  The sensitivity of finishing time to coefficient of friction is approximately 1.5 minutes / 0.001 over the range of friction coefficients in the simulation. 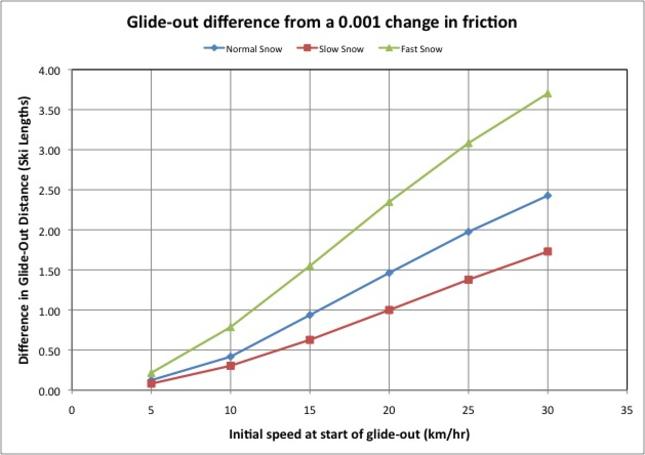 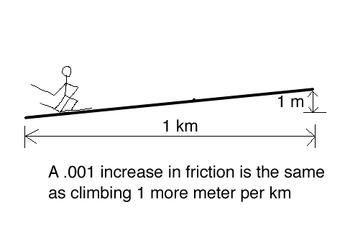 From these charts you could estimate the difference in friction between two skis you are testing if you make an estimate of how fast your initial velocity is and what type of snow you are on.  And from that, an estimate of the impact on race time performance.  And from that, you can make informed decisions about how much improvement you are getting from your investment in time, money and effort.

For example, if you go down a hill and reach flat ground at a speed of 25 km/hr you will glide for about 25 seconds and cover 90 meters.  If one pair of skis glides 2 ski lengths farther, that represents a change in the coefficient of friction of about 0.001.  As noted above that equates to a 90 second faster Birkie race or a 9 second faster 5 km race.

​Coefficient of friction is not a term most of us are very familiar with.  This page tries to explain what an increase in friction translates to in terms more familiar to skiers.

Due to colder temperatures when using a warm, normal or cold wax 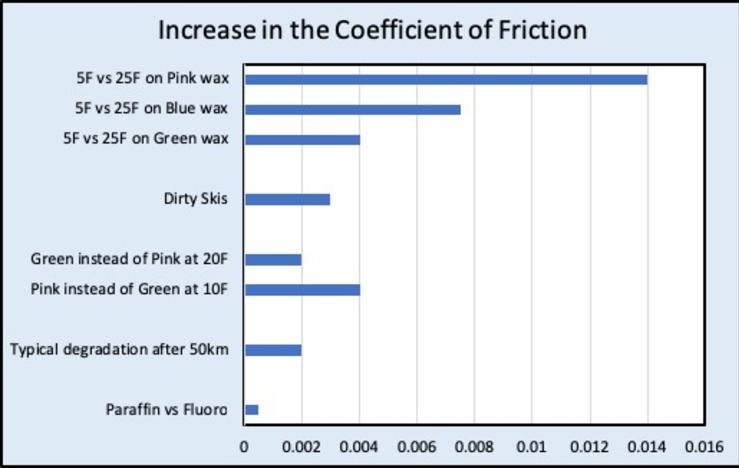 This chart shows how much the coefficient of friction increases due to different things.

A higher coefficient of friction = a slower ski.

Due to dirt accumulation from dirty snow

Change in race time performance from a change in ski friction

Change in gliding distance from a change in ski friction 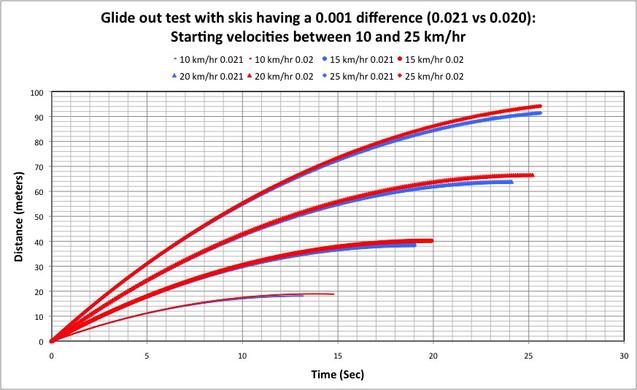 How much ski friction changes with different factors