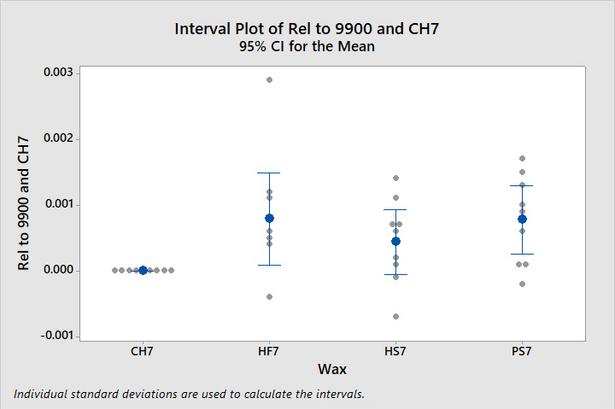 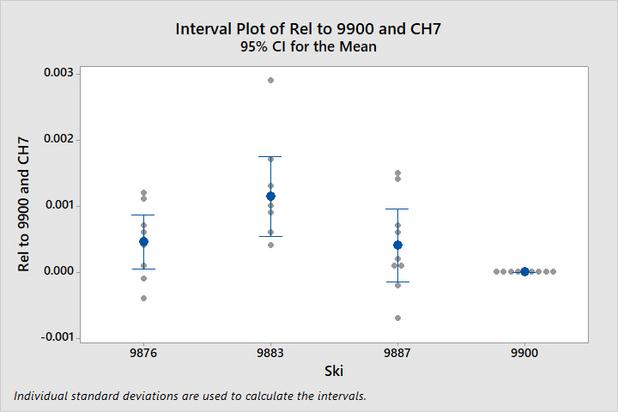 Chart 2, the effect of a specific ski:

Why is CH7 doing the best?   CH7 is always on ski number 9900.   Is it possible the 4 skis are note performing the same?  We can break out the results by ski type instead of wax type.   Chart 2 below shows this analysis;    When the data is analyzed this way we see that ski 9883 is slower than the other 2 test skis and all are slower than ski 9900.   So it is possible that the reason CH7 looks better in chart one is that ski 9900 is just better than the other 3.   So, the way this experiment was constructed we won't be able to conclude anything regarding CH7 vs the other 3 waxes.  But, since the other 3 are being rotated across all three ski and are being tested repeatedly over a wide range of conditions, we can make conclusions regarding the relative performance of the other 3 waxes to each other.

​The results are presented as the difference in friction compared to the CH7 control ski.  By comparing to a control ski/wax, the effects of temperature/snow age/humidity, etc are normalized out and a smaller difference in performance can be seen.

Chart 1 below shows the difference in friction by wax type to the CH7 control.  The CH7 control wax is always on ski number 9900.   The other 3 waxes have been rotated across 2 of the 3 sets of test skis (ski numbers 9876, 9883, 9887).  One more round of testing is planned which will rotate the waxes to the 3rd of the three test skis.  In this chart we see that all 3 test waxes have more friction than the CH7 control wax.  No statistically significant difference is seen between the HF7, PS7 and HS7 waxes.  The friction difference is less than 0.001 which is small and would change a typical Birkie race time by 60 seconds or less.  One thing to note, the less expensive PS7 wax is performing the same as the more expensive HF7 and HS7 waxes.

For the 2020/2021 ski season Swix introduced a line of non-fluorinated waxes.   We are in the process of evaluating the "7" series waxes.  We are testing the PS7 and HS7 from the new lineup vs the older CH7 and HF7 waxes.

We have 4 Solomon skate skis with matched stiffnesses.  One of the 4 waxes was applied to one of the 4 pairs of skis.  Throughout the 2020/2021 winter season we are measuring the friction of these 4 skis repeatedly.   The testing is always done a wax appropriate temperatures (~15 Deg F to 32 Deg F).   The testing is across a wide range of snow types, ages, temperatures and humidity.

One of the 4 pairs of skis is always being waxes with CH7 and serves as the control ski that all others will be measured against.   The other 3 waxes (HF7, PS7 and HS7) are being rotated across the other 3 skis.

All skis were throughly cleaned and waxes three time prior to each application of the test waxes.