Hardness measurements for many common waxes

NEW!  A look at the new Swix Non-Fluoro performance waxes.

​Communicating the results from a large body of ski wax test data is very difficult because the friction of a ski on snow is highly dependent on many factors (air temperature, age of the snow, how the snow is paced and groomed, ski flex and base treatments).  We are only interested in the change in friction due to different base treatments, but the differences due to the other factors can often overwhelm the differences due to waxes and base grinds.  To overcome this problem we always run our test skis alongside a control ski.

The control ski is always prepared the same way (with Rex Blue wax on factory grind base).  By looking at the difference in friction between the test skis and the control ski in every test we can eliminate much of the variation in the test data due to the other factors.  Using this method, the effect of waxes and base grinds across a large set of data becomes very clear.

To find useful summaries of the data, click on the buttons below.  Some examples of the raw test data is shown below the buttons.  For even more detail, watch our YouTube video or read the technical paper.

Changes in race times due to the effect of different waxes

Change in friction vs kilometers of skiing

Sample Raw Data From Our Testing:

The chart below show the data we acquired for Swix CH4 and CH8.  This chart show the difference in performance of the test skis with CH4 or CH8 relative to the control ski with Rex Blue.  The shaded lines show the statistical confidence level of the data (it's quite good).  From data like this we can construct the wax reference guide and the wax performance forecasts (see links above). 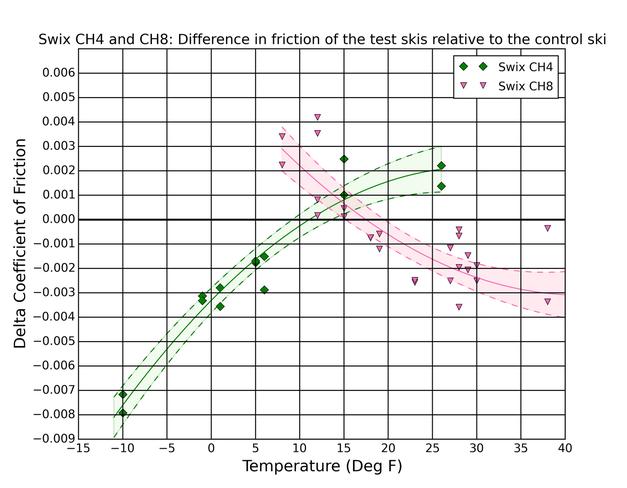 Wax performance vs temperature for many common waxes